When W.C. Handy had a huge loss from the popular “Memphis Blues” in 1912, because he was convinced to sell the copyright for $50, he was determined to make a hit with his next song. The tango was popular at the time, and he had the idea to put the tango rhythm and down-home blues together. He wrote “St. Louis Blues” in a rented room on Beale Street in Memphis, while remembering a woman in St. Louis who said “my man’s got a heart like a rock cast in the sea.” 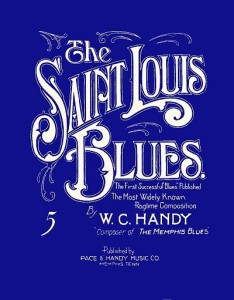 Handy’s band electrified dancers with the song, but no publishers wanted it. So, Handy and a partner, Harry Pace, started their own publishing company. At first sales were slow. Sophie Tucker and Ethel Waters were among the first to perform the song, and Gilda Gray shook the world when she introduced “The Shimmy” while performing the song.

The song became so popular that it inspired the”Foxtrot” and became the first genuine blues “hit” as a pop song. The song includes a typical 12 bar blues form plus the “tango” bridge, a 16 bar section with a “habanera” rhythm.

Though it didn’t sell well, the Columbia Records house band was the first to record the song in 1915. The first hit was by Al Bernard in 1918, and probably the most famous recording is by Bessie Smith with Louis Armstrong, recorded in 1925.

Some other famous artist who recorded the song: Cab Calloway, Paul Robeson, Django Reinhardt with Stephane Grapelli, Bob Wills and his Texas Playboys, Benny Goodman, Earl Hines, Glen Miller, Art Tatum, Teddy Wilson, Chet Atkins (his first recording), Judy Garland, Stevie Wonder with Herbie Hancock, and even the Beatles, (who can be heard jammining on the tune on some bootlegs, before they went into “Hey Jude.”) Of course, there are many, many more.

The song was also the title of the 1958 biopic about Handy, which starred Nat “King” Cole as Handy, and a stellar cast including Cab Calloway, Ella Fitzgerald, Mahalia Jackson, Ruby Dee, Barney Bigard, Pearl Bailey, and Billy Preston as the young Will Handy.

Other films that used the song include Charlie Chaplin’s “The Star Boarder” from 1914, “Baby Face, (1936); a 1931 Minnie Mouse short called “Blue Rhythm,” sung by Marcelite Garner; and “Banjo on my Knee,” (1936), in which Walter Brennan plays the song while Barbara Stanwyck looks on.

Other uses include the title of William Faulkner’s “That Evening Sun” from 1931; Jean Paul Sartre’s existentialist play “No Exit,” where the character Estelle talks of dancing to “St. Louis Blues;” and of course the NHL hockey team named after the song.

Prince George of England and Princess Marina of Greece danced to the song at their wedding, and the Queen Elizebeth’s mother called it “her favorite song.” Also, Ethiopia used it as war song when Italy invaded in the 1930’s.

I am drawn to the song because of the mixture of blues and the tango – rhumba rhythm. I added my own intro, but it is inspired by pianist Pete Johnson’s rollicking intro to “Roll ‘Em Pete.” One of my favorite versions of the song is from the Joe Turner “Boss of the Blues” album, which features Pete Johnson along with Freddie Green (guitar) and other Basie band members.

The lyrics have been slightly altered from the original verses, which were written for a woman singer, and the original has more verses, making for a long story that has been called the “Hamlet of Jazz.”

I recorded this the same day as “Avalon,” so I plead guilty by reasons of a cold (or insanity for even trying) for missing that last note.

St. Louis woman with a diamond ring
drags her man around by her apron string
t’were’nt for powder and store bought hair
That woman I’m loving would go nowhere, nowhere, nowhere

I’ve got the St. Louis Blues, I’m as blue as I can be
my baby took my heart and tossed it like a rock into the deep blue see
Sometimes I wonder how I let her make a fool of me